This is an area of expanding research that is so vast, scientists are only just embarking on a deeper understanding about endocannabinoids and why they are in humans and other species of animals, as they are present in all vertebrate species, (Elphick and Egertová, 2005), which was a discovery only made 35 years ago when endocannabinoids were identified in a rats brain.

Therefore, it is only in the last ten years that substantial financial investments are becoming more ubiquitous in this rapidly growing field, hundreds of thousands of dollars are being paid into scientific research on endocannabinoids and the benefits and effects of Cannabis oil on human illnesses. This has led to the strengthening of testimonials with positive results, developing within both academic science, peer reviewed journals and the growing CBD oil industry in an area of natural medicine that is finally gathering academic respect and huge momentum. We are seeing more and more people consider its medicinal benefits after trying the usual allopathic medicine route, by those who choose cannabis as a serious therapeutic treatment and by doctors and scientists.

Endocannabinoids, cannabinoid receptors (primarily CB1 and CB2), and the enzymes that synthesise and degrade endocannabinoids are involved in brain function, body function and help regulate sleep, appetite, pain and reproduction. Basically, endocannabinoids are involved in receptor activity and the regulation of every physiological function in the body. We have been shaped by plant ecology, nature and evolution, when we understand our internal ecology and connect it to our past evolution, we can use plant medicine very effectively. We have everything we need in our environment as a form of natural medicine. We have evolved with endocannabinoids in our physiological make-up because we have used marijuana plants and other medicinal plants for as long as we have existed from apes, Ramapithecus Sivapithecus, to other early Bipedal Hominids and eventually, Homo Sapiens.

The main endocannabinoid receptor, CB1, was first discovered in a rat brain in the early 1980s and is now known to be among the most abundant G protein. Since then our scientific understanding is developing much deeper. Tetrahydrocannabinol (Δ9-THC), is the primary psychoactive component of the cannabis plant, and produces psychoactive effects by engaging CB1 cannabinoid receptors. Its therapeutic effects are efficacious for multiple therapeutic indications and maladies, (Dhopeshwarkar A, 2014), (Grotenhermen and Müller-Vahl, 2012; Borgelt et al., 2013).

THC and CBN are able to fit like keys into the existing network of our body’s endocannabinoid receptors. Stimulating our internal endocannabinoid system with plant-based CBD restores balance and helps benefit our system. The compounds produced inside of the body, interact with these receptors. As many say, it’s like we were made for each other. Although there exists many types of endocannabinoids, one of the most widely known and studied is N-arachidonoylethanolamine (AEA). In humans, the CB1 receptor influences memory, learning and disease states associated with CB1 receptors are observed in addiction disorders, motor dysfunction, and in bipolar depression and anxiety disorders.

CB2 is also noted for its analgesic effects on pain. Endocannabinoids regulate cell function and stimulate regulation of pain, anti‐excitotoxic, anti‐inflammatory, and vasodilatory effects. Analgesia, the ability to supress pain, is the main therapeutic aspects of cannabinoids that interest scientists. Cannabinoid analgesia is based on the suppression of spinal and thalamic nociceptive neurons. The chronic pain that occasionally follows peripheral nerve injury is very different from inflammatory pain and is an area of considerable unmet therapeutic need in medicine.

Medical researchers have only recently discovered lymph cells present in the brain region, connected to the spinal area, we now know that immune problems directly affect the brain region and nervous system, which is interesting when looking at the beneficial effects of CBD oil on immune protection, inflammation and pain control. The framework for such analgesic effects exists in the CB receptors, which are found in areas of the nervous system important for pain processing and in immune cells that regulate the neuro‐immune interactions which in turn mediate the inflammatory hyperalgesia, (Zogopoulos et al, 2013).

Chronic inflammation is one of the precursors of depression and using Organic Full Spectrum CBD oil is one of the best natural medicine options to address this since the compounds help stimulate our bodies own endocannabinoids and we can feel the benefits within ten minutes or so of using the medicine.

Personally, I find full spectrum CBD oil useful for combating acute anxiety, I have Aspergers, which means I am on the autism spectrum, consequently, I have to deal with anxiety and depression on a daily basis, which is greatly reduced when I am taking CBD oil. I also use it to treat chronic inflammation and have various health benefits. I have tried a lot of different types of full spectrum CBD oil on the market, there can be problems with finding one that is of high quality and that preserves all the beneficial compounds, therefore one of the highest quality on the expanding market which I use is  HBNatural CBD  which is one of the most transparent organic CBD producers in this growing field, with laboratories that are using the most up to date, state of the art extraction equipment, that ensure no moulds or bacteria contaminate their products

WHAT CAN CBD OIL DO FOR YOUR PET?

Over the past years, scientific research has proven that CBD can help dogs, cats and other pets with cancer, seizures, pain, and more conditions.

As we get to know more about the effects of CBD for mankind, we find ourselves naturally asking: Could CBD oil help our pets?

A growing number of veterinarians believe cannabidiol (CBD) products can be effective in treating an array of conditions in dogs and cats, from anxiety to a lack of appetite.

Scientifically, dogs (and most mammals) have a similar anatomy to humans. Studies in the last decade have shown that the endocannabinoid system can be found in most mammals. Considering that CBD works directly with this nervous system, we can confidently conclude that CBD will have some sort of influence on our dogs. Early research and anecdotal testimonials show that CBD oil has helped our pets in many different ways. Here is a list of various conditions that CBD has been found to help treat (and/or cure) your pets:

HOW CBD OIL CAN HELP ANIMALS 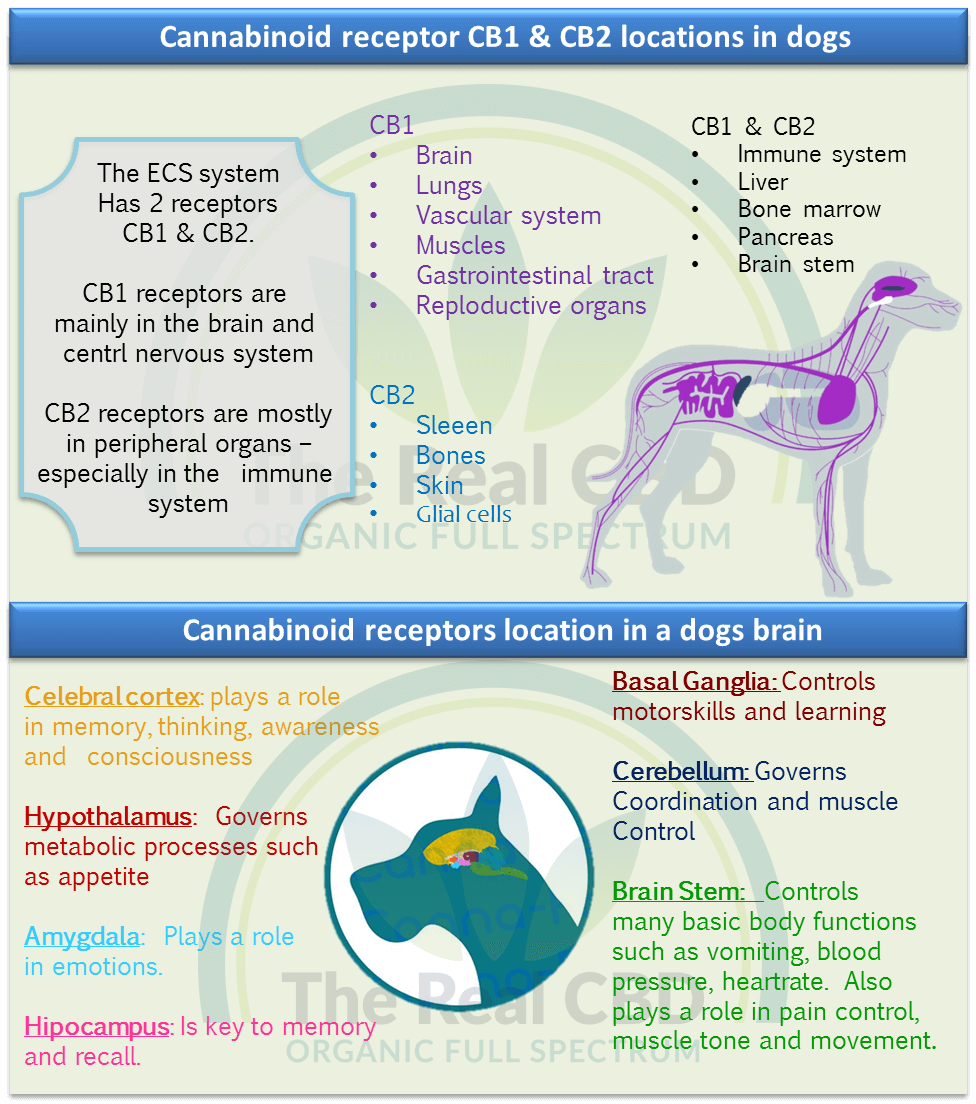 WHAT CAN CBD OIL DO FOR YOUR PET

CBD for our pets is available in many convenient forms. Extracts can be given from a dropper bottle directly into the mouth, added to food, dropped on a treat, rubbed into the bare skin or inside the ears, or dropped on an animal’s paw so they will lick it off. Dosage can vary quite a bit from one situation to the next. It may be necessary to experiment a little to find the right amount,
and how often to give.

Typical suggested starting dose: 1 mg – 5 mg CBD per 5kg (10 lbs) of body weight. Start with a dose on the low end of the range. Changes usually occur within 30 minutes. If there is no change after an hour, increase the dosage. Occasionally improvements will take more than one treatment. To control pain, give approximately every 8 hours. For other uses, or to break unwanted behaviour patterns give once or twice a day. Remember that you cannot overdose and there is no toxicity associated with CBD.