The UN defines genocide as “any of the acts perpetrated with the intention of destroying, in whole or in part, a national, ethnic, racial or religious group.” But the classification of such crimes as genocide or not is partly a matter of the number of victims. While the genocides of Rwanda or Bosnia received global attention, many others that take place outside the visual field of public opinion, especially on the Latin American continent. These are neither investigated nor recognized because they involve rural villages of a few hundred, or even a few dozen people.
Although the agreement on the genocide of the United Nations (UN) Organization came into force 70 years ago, entire tribes continue to be attacked and exterminated by  powerful corporations and their dominant society in order to steal their lands and natural resources. In the depths of the Amazon rainforest, one of these native tribes forced to uproot and leave their ancestral land because of this. It is the Kawahivas, a small isolated tribe of a few dozen members, survivors of waves of violent attacks that have brought them to the brink of extinction.

”Their territory, known as Rio Pardo, is in Mato Grosso state, where illegal deforestation rates are the highest on record in Brazil’s Amazon.

Rio Pardo lies within the municipality of Colniza, one of the most violent areas in Brazil. 90% of Colniza’s income is from illegal logging.

The Kawahiva’s plight is so serious that in 2005 a public prosecutor launched Brazil’s first ever investigation into the genocide of an uncontacted Indian tribe. Twenty-nine people suspected of involvement in killing Kawahiva, including a former state governor and a senior policeman, were detained but later released. The case has stalled for lack of evidence.”– Survival International. 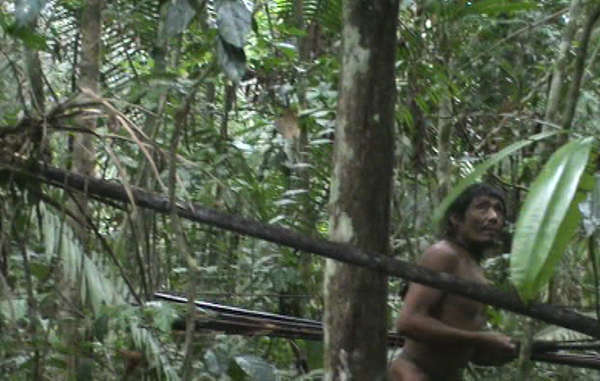 The last of the Kawahiva are forced to live on the run from armed loggers and powerful ranchers. Image taken from rare footage from a chance encounter with government agents. -FUNAI

We know almost nothing of the Kawahiva, except that they have been forced to change their way of life from settled villages to becoming nomadic and only setting up temporary shelters to constantly flee the Oil merchants and the Loggers tractors and mechanical saws. They live in constant fear of genocide, in this region of the Brazilian Amazon basin, where there is the highest rate of illegal deforestation in the country. The territory of the Kawahivas is located near the city of Colniza, one of the most violent areas of Brazil, where 90% of the income comes from illegal logging for the timber industry. Unless the Brazilian authorities act immediately, the genocide of the Kawahivas will be fulfilled shortly.

Often, small tribes such as the Kawahivas are seen as an obstacle to the advance of  oil drilling and agro-industry, mineral extractive industries, roads and dams. The Brazilian Amazon is home to around 100 isolated tribes, which make up the vast majority of the world’s uncontacted population. They are the most vulnerable people on our planet.

As the jungle is invaded and destroyed in the name of economic progress and personal gain, these peoples are attacked and liquidated by the simple fact that greedy outsiders know that they can even kill with impunity and the public media do nothing to report these horrors. These are silent and invisible genocides, of which there are hardly any witnesses. Often, the news only comes to light months or years later. It is probable that we will never get to know the real number of uncontacted indigenous peoples that have been eliminated because they are indigenous, they may not even speak more than their own native language, not Portuguese, and they are seen by the established colonials and especially by the elite and government as a “nuisance” and obstacle to development.

This mentality goes back to the Far West of the 18th and 19th centuries, when the native peoples of the United States were annihilated by the settlers, many of whom considered that “the only good Indian is the dead Indian”. Jair Bolsonaro, president-elect of Brazil, also thinks this. He has declared that “it is a shame that the Brazilian cavalry was not as effective as the Americans, who exterminated their Indians.”

His words of hatred add fuel to an already incendiary situation: in recent months those who want to appropriate indigenous lands have been encouraged and attacks on indigenous communities have proliferated. Bolsonaro has proposed to take FUNAI, the Department of Indigenous Affairs responsible for uncontacted indigenous peoples, from the Ministry of Justice to place it in the new Ministry of Women, Family and Human Rights. This will undoubtedly reduce the effectiveness and influence of FUNAI.

Moreover, she has appointed Damares Alves as the new minister, an evangelical preacher and parliamentary assistant. Along with other people, she founded Atini, a group dedicated to evangelizing indigenous communities that is being investigated by the prosecution for incitement to racial hatred against indigenous peoples.

Bolsonaro has promised that under his presidency will not protect “a millimeter” more of indigenous lands. Sonia Guajajara, an indigenous woman who joined the candidacy of another candidate for the presidency in 2018, declared during the campaign: “In Brazil, there is a political decision not to demarcate territories and, when it is denied [the demarcation] an entire population is condemned to extermination”.
Things do not have to be this way. Survival International was founded 50 years ago, after the publication of the article “Genocide” by Norman Lewis, in the Sunday Times [British newspaper] in 1969, which revealed the atrocities suffered by many indigenous peoples in Brazil in the last century. The 50 years of our successful campaigns demonstrate the strength and influence of raising awareness and mobilizing public opinion against governments and companies that do not respect the rights of indigenous peoples.

Now more than ever we have to mobilize our collective strength to denounce and put an end to these hidden genocides. If we stand silent and do nothing we are also complicit in the annihilation of the indigenous natives who are the most responsible and environmentally conscious guardians of the Amazon forest.

The Silent Ecocide, a crisis of consciousness