Fifty million indigenous people live in the world’s remaining forests and 370 million Indigenous people live in various different threatened wildernesses and ecological biomes across the world. We need to take into consideration their defence treaties for the last natural wildernesses that they occupy on the Earth. I have found that working on conservation of the land with indigenous people involves dealing with many of the front line issues that the larger established charities, governments and academic institutes know little about. One common example in the Amazonia regions of South America, is the ongoing internalized governmental corruption where some government connected corporations provide finances  and arms to  vigilantes to attack indigenous environmental activist leaders and drive indigenous people forcefully off of their land. If governments in Amazon region countries gave more protection and powers to indigenous leaders and reinforced heavy prosecution on such cases, these incidents would be discouraged but instead they are conveniently overlooked and such activities are increasing with corporate land grabs and violations of indigenous people’s rights to critical escalation in Ecuador, Brazil, Peru and Colombia.

Many indigenous communities live solely off of the land, many live in isolated regions that are difficult to access, therefore most are not money motivated or materialistic in the way Westerners are and this goes in their favour to be the world’s best and most trusted conservationists. Their lives depend on the preservation and conservation of their ancestral land, not on money. Their connection with the environment is not just dependent on daily living, it is part of their spiritual ancestry, their spiritual ecology, part of their souls and beating hearts. This is what we have forgotten in Western civilization.

Therefore, they are the best conservationists to manage and conserve the forests and last great wildernesses, as their immediate survival depends on the land and they are attuned to the environment around them, because of this, they are also the most vulnerable when it comes to ecocide, their cultures and survival is ultimately threatened. Read my previous article People on the Edge of Extinction-The Last Tribes of the Amazon

There are indigenous conservation treaty recommendations supported by many Indian and Alaskan Native organisations. A recent convention set up by the Indigenous peoples of all the Americas allowed them to form sixteen principles for building a sustainable and harmonious world community.

This emerged from a 40-year-long process of reflection, consultation and action within Indigenous communities across the Americas. These principles are rooted in the concerns of hundreds of Indigenous Elders, Spiritual Leaders and Community Members, they are also rooted in deep ecology values, they recognise the interconnectedness of all life on Earth and how we affect one another and the Earth with our actions. They recognise how humans must work on internal balance to create external balance and a sustainable world. They recognise the importance of morals, and ethics in communities. These guiding principles constitute the foundation for the process of healing and developing ourselves (mentally, emotionally, physically, and spiritually), our human relationships (personal, social, political, economic, and cultural) and our relationship with Mother Earth.

The senseless annihilation of the Earth’s last rainforests is part of an ecosystem, not only providing vital equilibrium for the climate but also plant medicines and foods and resources everyone takes for granted. Corporate ecocide has to stop along with the global unfolding ecocide of other ancient wildernesses where our great indigenous people remain. 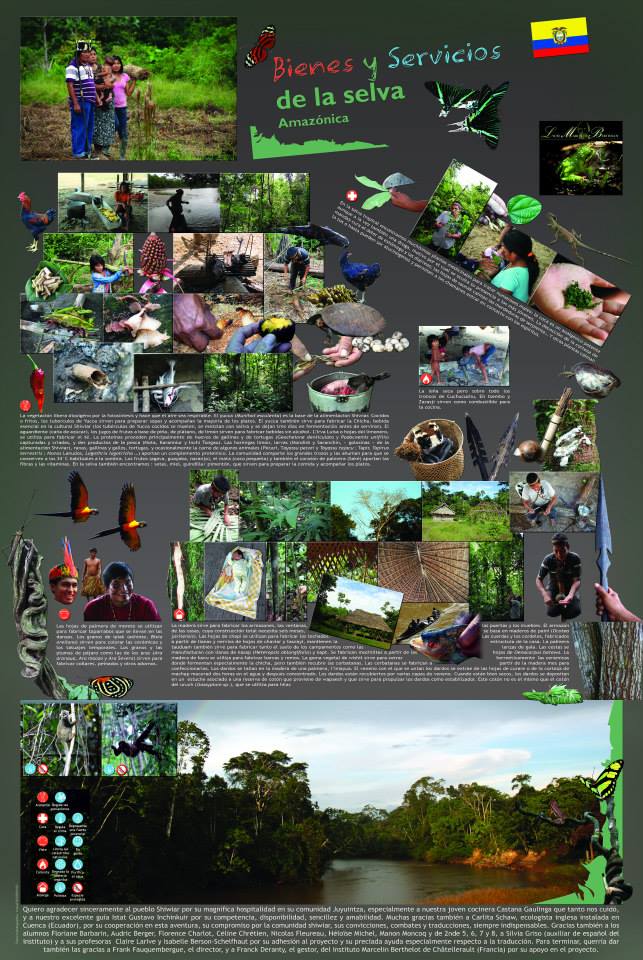 The above  poster illustrates the ecological goods and services from the rainforest,  it was made in 2012 by my friend Samuel Remerand, a French Biologist and teacher, to educate adults and children in the West on the ecological goods and services that the Amazon rainforest provides for its people. Samuel Remerand, came all the way to Ecuador to work with the Shiwiar people and took thousands of photos. We stayed for 3 weeks with the Shiwiar people of the Ecuadorian Amazon, deep in a remote part of the Amazon, which is only accessible by an apache airplane, it took a 1 and a half hour flight over the Ecuadorian Amazon to reach the Shiwiar territory,

Here is a video of some of our experiences when we were there.

All this senseless destruction of the Amazon rainforest, is for gold, or minerals and a non-renewable fuel, Petroleum, the black life blood of Pacha Mama herself, valued over human life and all life on planet Earth. How many of us have to suffer and to what limit of destruction will this planet be pushed to, before we realise human consciousness is now an ecological issue? Humanity is a threat to itself unless we change the way we live on this planet, we have to live with nature, not separate from her, we are our environment, we are nature.